The Fiddler and I
Pat Olkowski and Becky Cole 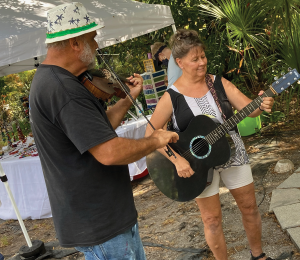 The Fiddler and I, Becky Cole and Pat Olkowski, offer up a new opportunity to take in some down-home tunes. “If you like a variety of music with a heavy dose of fiddle styles, you’ll like us,” he said. “It’s the best taste of Old Florida you’ll find in the county.”

As for the music, Olkowski describes it as Irish, old-time, bluegrass, Cajun, jug band, gay ’90s, blues, folk and more and the duo often plays to the mood of the audience. “A good tune is a good tune and you can play or sing any song an infinite variety of ways so we make a point of playing what our listeners want to hear.”

Olkowski first picked up the fiddle in the early ’70s while working on the Alaska pipeline, but has been playing guitar from the early ’60s.
“When I got to Alaska, I had been following mostly Peter, Paul and Mary and Simon and Garfunkle-style folk music with a little Roger Miller country mixed in,” said Olkowski. “On arrival, I got exposed to so much music of all kinds that a quickly acquired a banjo and later a mandolin. If you play mandolin for any length of time, you eventually pick up a fiddle. So it wasn’t long before I had to have a fiddle. I didn’t know at the time that I was taking on a lifetime endeavor.”

Cole picked up the guitar at the urging of Olkowski. “My first introduction to music was with a mandolin but I never quite got the hang of it. Then when I met Pat and followed him from my home in Kansas to Florida, he kept prodding me to learn to play the guitar,” said Cole. “It has been a difficult process because the older you get the more difficult it is to learn to play an instrument. It took some doing to get my brain and my fingers to work together. When I finally mastered a few melodies, Pat then said it was time for me to sing. My first reaction was he wanted me to play and sing. This was going to be another challenge but somehow it all came together.”

When describing the music produced by the Fiddler and I, Cole said that while they remain true to the original classic music they play, they have also learned how to add their “own” voice to each of the songs.

In addition to their performances, Olkowski frequently introduces a song with a little history about the message or the style of the composition.
“We do a variety of songs that range from making the listener happy to making them sad, but either way, audiences come to appreciate what we do and we are having a great time bringing it to them each week,” he said. 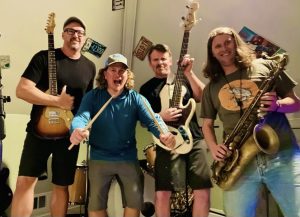 2:30
Hot Flashz
A 45 and Older Entertainment Troupe for Charity. 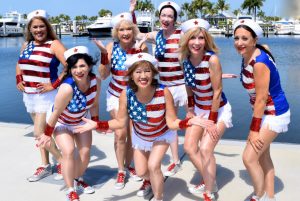